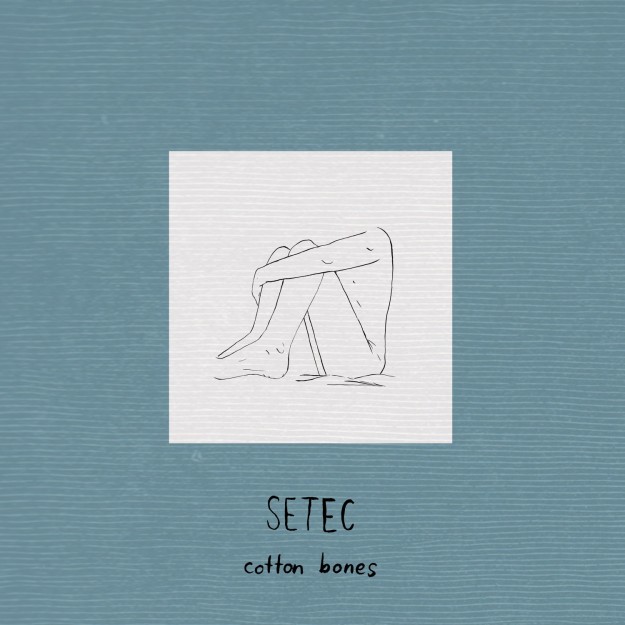 Setec is back with his brand new single, ‘Cotton Bones’, which has just premiered over on whothehell.net here.

The single is lifted from his forthcoming album, the follow-up to his gorgeous 2014 masterwork, Brittle As Bones.

‘Cotton Bones’ finds Setec further refining his distinct sound with gentle piano chords and looped percussion providing the foundations for a typically joyous and catchy refrain. This little taste is a sign of wonderful things to come from this very special artist.

Setec will be launching the single at the Gaelic club in Sydney on Saturday, May 6th. The show is hosted by our friends at Skydreams with supports from Spirit Faces, Imperial Broads, and Okin Osan. Full event details here.

A 5″ vinyl copy of the single will be available at the launch, but these are very limited so you’ll have to get in quick!

Stay tuned for more Setec news, but for now lose yourself in the new single. 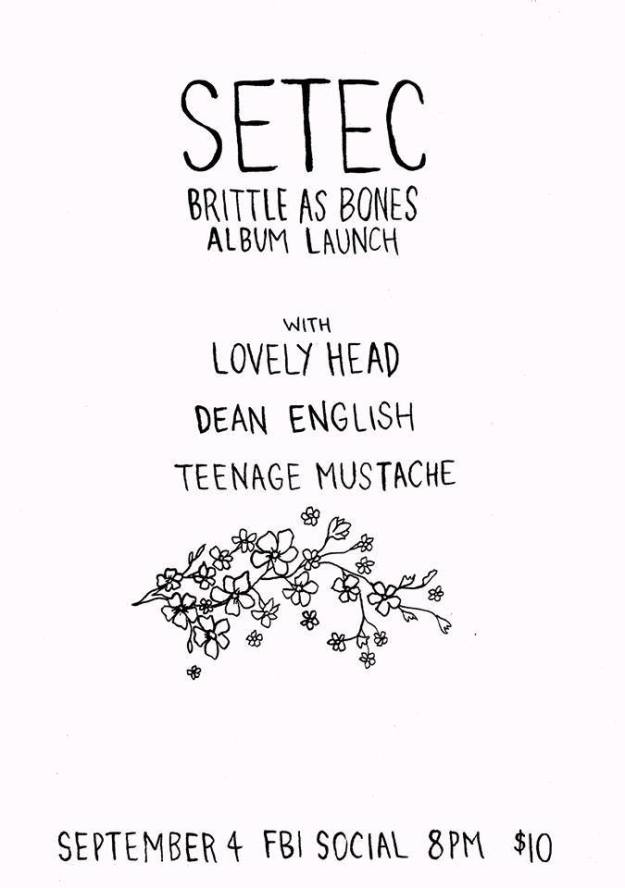 Sydney folks get down to FBi Social this Thursday night for the launch of Setec’s stunning new album Brittle As Bones.

Supports on the night come from fellow Sydney-siders Lovely Head, Dean English and Teenage Mustache.
On the night you can also grab a limited edition cassette version of the album, so be sure to come along and join in the fun. 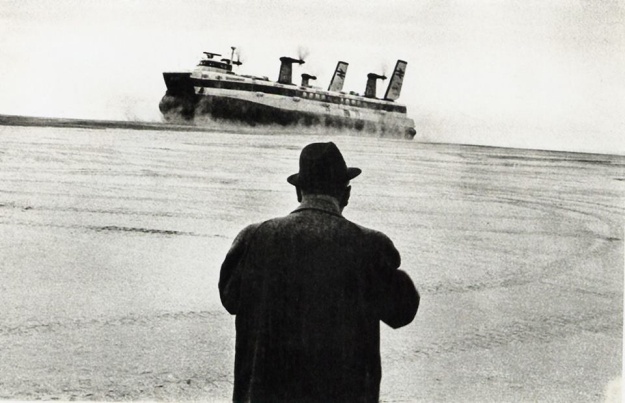 The lovely folk at Who The Hell have just premiered the POWER MOVES remix of Spartak’s track Nightshift stating the “remix emphasises Buckett’s penchant for loops and abstraction – not to mention footwork. It’s a frightening snippet of mutated vocals and clattering snares; a very different animal to the original track”.
Listen to the remix and read the full article at the Who The Hell website here

Nightshift is taken from Spartak’s recent Five Points EP, and the remix comes from a special edition release of the EP which includes remixes from Andrew Pekler, Scissor Lock and Gatherer as well as a limited edition T-shirt.
Grab the special edition of the EP via the Spartak bandcamp page here

The band will be hitting the road shortly to launch the EP with dates confirmed for Sydney, Melbourne and Brisbane. Check out the details below and stay tuned for further launch dates in Perth and Adelaide.

We are joining forces with Melbourne label Fallopian Tunes for a special showcase at FBi Social in Sydney on January 31st.

The evening will play host to a bunch of great artists from both labels including Bon Chat, Bon Rat, Trjaeu, Nimble Animal, Yolke and Haunts.

If you are in Sydney on Jan 31st be sure to get down to FBi Social at the Kings Cross Hotel – 248 William St, Kings Cross.

As a teaser to the evening check out the tunes below from some of the acts playing on the night.

We recently co-hosted a show with Red Door at the Red Rattler in Marrickville with all proceeds going to the Dirty Shirlows collective.
It was a fantastic night with incredible performances from Making, Nakagin, Haunts and Option Command, all of which were captured by the wonderful folk at Skydreams.

We are thrilled to be co-hosting what is sure to be an incredible evening in Sydney on Thursday November 29th.
Feral Media and our good friend Scarlett Di Maio (aka Red Door) have gathered together some of our favourite Sydney acts for a fantastic evening of ecelectic & experimental music at the Red Rattler in Marrickville with all proceeds going to the Dirty Shirlows Collective.

Playing on the night are Making, Nakagin, Haunts and Option Command and to top it all off we have put together some great door prizes and giveaways for the night.
The Red Rattler is located at 6 Faversham St, Marrickville with the evening kicking off at 8pm. Further details can be found on the facebook event here.

If you are in Sydney on November 29th we would love to see you there!

For all you Sydney folk, Feral Media will be curating the next installment in the wonderful Sound Series nights at the Hardware Gallery in Enmore. Performing on the night will be Feral artists AFXJIM, Broken Chip, Comatone, Scissor Lock (aka Marcus Whale of Collarbones) and the debut performance from Haunts – a collaboration between members of Underlapper and cellist Peter Hollo.

Come on down to see some amazing artists and support this wonderful series of musical events!

‘Softly Harboured’ is the third album from Sydney six-piece Underlapper, and is the follow-up to their acclaimed 2007 release ‘Red Spring’. A brilliant collision between the band‘s upfront, energetic live shows and the electronic experimentation of the studio, the album continues familiar themes established throughout their career, pushed into dramatic new territory.

‘Softly Harboured’ is – unsurprisingly – an eclectic affair, combining elements of post rock, experimental pop and downbeat electronica. Yet, despite these seemingly disparate elements, the album is a cohesive listen from start to finish and undoubtedly stands as their most accessible work to date.

The album also sees a renewed focus on vocal performance, with strong lead deliveries from band members Greg Stone and Morgan McKellar, artfully augmented with a diverse selection of guest vocalists – including Alexi Kaye and Sally Stevens (from the now defunct female a cappella group Kaya), and Dan Cunningham and Tim Jenkins, from Sydney group Parades. There is also a return performance from Morgan’s sister, Holly McKellar – who first appeared with the band on ‘Red Spring’ and who here provides the lush lead vocal on opening track ‘Kandos’. 

In addition, the band have enlisted the talents of renowned Sydney cellist Peter Hollo (Fourplay/Raven) who appears on a number of tracks and further expands the band’s already extensive musical palette.

With ‘Softly Harboured’, the band have chosen to eschew traditional distribution mechanisms and have instead enlisted the joint support of Feral Media (home to all Underlapper releases to date) and Canberra’s well-known HellosQuare Recordings. The labels will be working together to collaboratively release the album online – with CD version available from hellosquarerecordings.com and Vinyl + Digital from here at the Feral Media Bandcamp store.

The limited edition vinyl version of the album features five alternate sleeve designs created and assembled by some of Sydney’s most exciting artists, printed as black and white offset with a silver scratch-off overprint.

In support of the album, Underlapper will make their long awaited return to the stage with a launch in Sydney on April 21st 2011 as part of a New Weird Australia showcase at FBi Radio’s new venue – The FBi Social @ King’s Cross Hotel, supported by Cleptoclectics vs Scissor Lock, Edwin Montgomery and DJs Stupid Canon & Kimb Galercan.  More info at newweirdaustralia.com.

Underlapper will also look to launch the album in Canberra, Melbourne and Brisbane, details of which will be available shortly.

We’re showcasing five of our label artists as part of Carriagework’s Winterland series in Sydney, and – best of all – the whole night is FREE. The showcase, on Saturday 10th July 2010, features the main Winterland attractions – The Ice Rink, Markets, Café and Bar – and venue admission is free.

Performing live between 6pm and 10:30 will be VORAD FILS, TEXTILE AUDIO, AFXJIM and GENTLEFORCE – plus there’s a number of DJ sets throughout the night from UNDERLAPPER. We’ll also have our Merch stall set up with our audio wares, including recent releases from VORAD FILS, GENTLEFORCE and AFXJIM. We’re also doing a presale of our next release, from operatic mezzo sorpano, TEXTILE AUDIO.

All info on Spacebook!

This Saturday (8th May), two Feral Media artists will be performing live at the latest Finders Keepers markets at Carriageworks, in Eveleigh, Sydney.

Finders Keepers design and art markets are dedicated to supporting young emerging designers and bringing new contemporary design to the forefront in Australia.

ALPEN, whose new album will be the next release from Feral Media, will be playing at 3pm, followed by AFXJIM at 4pm.  As always, entry to the markets is free.  More info at www.thefinderskeepers.com.